Be sure to bookmark this highly recommended Space Directory Astronaut Autopen Guide.

In fact, the entire site is a treasure trove of great astronaut and space collecting information.

Kudos to the webmaster, Craig.
Posted by Steve at 4:26 PM No comments:

I attended the UACC National Show in Secaucus, NJ this past weekend. The show promised a good lineup of guests and I was looking forward to seeing many on my online buddies from around the country.

The show was held in the Exhibition Center of the Meadowlands Crowne Plaza. I've been in this room many times for other events, so I knew it would be hot. The room is always hot and the 100+ temperatures outside didn't help. Even industrial sized fans could barely help the weak air conditioning.

My plan was to get several signatures on my Saturn V wooden model and the SpaceShip One pilots to sign my new SpaceShip One wooden model. After that, I wanted a few signed photos from the guests and I would browse the dealer tables.

My first stop was with Kier Dullea and Gary Lockwood of 2001: A Space Odyssey. I wanted to add them to a photo previously signed by Arthur C. Clarke. This is a vintage still that I picked up in NYC years ago and was signed by Mr. Clarke in 1999. The Clarke signature and inscription is so nice that I was tempted to leave it as is, but temptation got the better of me and I had the 2 actors add their signatures. Both actors were very friendly.

My next stop was at the SpaceShip one table. 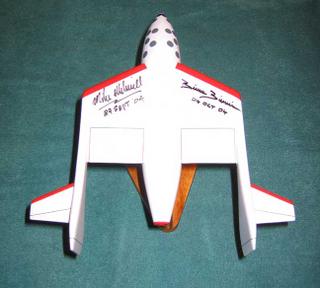 I asked Mike Melville and Brian Binnie sign a wooden desktop model. Both were real gentlemen and were a pleasure.

The rest of the people I wanted to get had fairly long lines, so I decided to browse the dealer tables a bit waiting for the lines to thin. I've been to enough of these shows to know that the lines always thin by noon, so there is no need to wait in long lines... be patient and you will get the signature you want. None of the guests are going to get up and suddenly disappear.

Next, I stopped by Rusty Schweickhart's table (Apollo 9) and had him add his signature to my Saturn V wooden model. It now has a dozen signatures on it, so signing space is getting limited.

After Rusty, Ed Gibson (Skylab), was my next stop. Always a pleasure, Mr. Gibson signed my Saturn V model as well. If I want any additional signatures on this, I may have to start using the base.

I returned to my car to unload the models -- they are a pain to carry around -- and returned to the show to have Valentina Tereshkova (the first woman in space) sign a photo for me. She looks unbelievably young for a 68 year old woman. She looks at least 10 years younger than she is. My regret is that I didn't think to take a photo with her.

That was it for the in-person signatures. I went upstairs to meet with the UACC Board in a wonderfully air conditioned meeting room. As we had sandwiches for lunch (Thanks to Al Hallonquist for the invite!) , Al Wittnebert tossed out a folder full of bargain signed photos... a special for the UACC Officers at the meeting.

I wasted no time picking out this one for $10. An in-person signature from early in A-ROD's career. This could be my bargain on the year.

After the meeting, I wanted to hit the dealer tables. I did a lot of browsing, but (thankfully) no big items caught my interest. I was thrilled to pick up this beauty from my favorite TV show for $10...

Most importantly, I did get to say hello to lots of listpeople we all know: Al Hallonquist, Bob Russo, Steve Gruber, Kevin Taylor, Bill Owenby, Bob Glass, Sam Stein, Steve Hankow, Tracey Kornfeld, Mint Montague, Carrie in the blue flightsuit, Doug Henry, Rob Pearlman, Andy McCully & Lauren, Linn LeBlanc, Eddie Bizbub, and I know I am forgetting at least 3 or 4 more. (Sorry) I did enjoy meeting everyone I spoke with.

Overall, kudos to the UACC, Steve Hankow and Nolan Sims for putting on a great event.
Posted by Steve at 10:50 AM 1 comment:

From the August 11 eSCD Newsletter:

The FBI has released details regarding the guilty plea entered by former boxer Chuck Wepner, who lost to Muhammad Ali in a heavyweight championship fight in 1975 and was using the prestige of that event and his career to sell forged Ali autographs. The files were sealed until recently, but a press release now reveals that Wepner entered a guilty plea in May for conspiring to commit mail fraud. He admitted to selling memorabilia forged by John Olson, who pled guilty in 2003 and received three years probation, those sales taking place from June 1996 through March 2002.

Among the items that were sold were Champions Forever boxing posters (gold ink versions are forged). The Champions Forever forgeries were exposed in 1996 by Sports Collectors Digest, which quoted Wepner as claiming the forgeries were purchased from another party. "John (Olson) is a good kid," Wepner said in that 1996 story. "He buys things in good faith and sometimes he gets stuck." Wepner is scheduled to enter his plea and receive his sentencing on Oct. 24 in San Diego. Wepner and Olson say most of their forgeries were sold through Brian Ginsberg, who was indicted recently in San Diego on 13 counts related to the sale of forged sports and celebrity memorabilia. Ginsberg entered a not guilty plea and has a hearing set for Sept. 12. Olson was quoted in an FBI press release as saying Ginsberg paid him and Wepner about $117,000 for forged memorabilia.

In a related case, Michael De Sola of Madison Sports pled guilty in March 2004 to mail fraud, again related to forged autographs, often Ali, and again in a case sealed until recently. De Sola was sentenced to three years probation and a $1,000 fine.
Posted by Steve at 11:17 AM 2 comments:

O.J. Simpson was heckled mercilessly before he was escorted out of the National Sports Collectors Convention in Rosemont, Ill., on Saturday. Darryl Rivera, who captured some of the booing with his video camera, tells us, "People were yelling, 'Killer!' Another guy yelled out, 'Guilty!' " Simpson, who was asked to leave because he hadn't gotten prior approval from organizers to sign autographs, was hawking 8- by 10-inch photos of himself for $100 a pop — cash only. Rivera said Simpson was traveling with several "good-looking blond women."