Are there any honest collectibles auction houses? Is anyone surprised by these stories anymore?

What happens when the investigators turn their gaze toward Mastro Auctions?

"Investigators grew increasingly suspicious as they examined scores of transactions between Noe and the Illinois memorabilia company [Mastro Auctions], according to Lucas County, Ohio, prosecutor John Weglian, and William Brandt, president of Development Specialists, Inc., the company hired by Ohio to liquidate the coin investment. Mastro Auctions, Weglian and Brandt say, may have engaged in shill bidding and other questionable practices that resulted in inflated prices and auction house commissions."

Here's a neat site. You'll have to deal with the annoying Angelfire popups, but it's worth the hassle.

Treasury Comics: Oversized Comics Checklist with Scans
Posted by Steve at 9:48 AM No comments:

It's kind of spooky hearing the voice of the late Marlon Brando speaking as Jor-El, Superman's dead father.

Here is the 2:33 international trailer...

Ghost Rider and the effects look pretty decent, but it is scheduled for February release.

It's The Pocket Comics' Fault 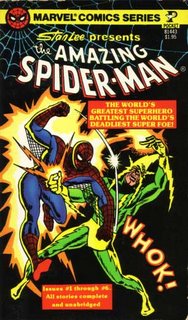 Way back in the day long before Masterworks reprints, trade paperbacks and the like, there were few ways a 9 year old Zipper could read Amazing Fantasy 15 and the first six issues of The Amazing Spider-Man.

Each $1.95 issue contained exact reprints of the six issues of the glorious beginnings of Spider-Man, The Fantastic Four, Captain America and others.

I read these treasures over and over and over again until the spines cracked and the pages fell out. I practically memorized the first appearances of The FF, Spider-Man, Doctor Doom, Submariner and the Sandman to name a few.

The seeds of the obsession from which I suffer today were sown in 1977 when my eager hands clutched the first Pocket Comics.

At the time, the books reprinted in these volumes seemed like an impossibility... treasures that I would certainly never be able to afford. My God, at the time, the first issue of Fantastic Four probably would have cost more than $100. An incomprehensible sum to someone whose allowance was probably 50 cents a week. 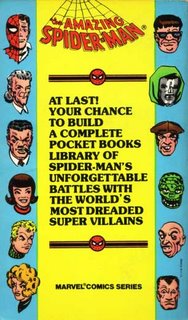 Here we are, almost 30 years later, and I have every issue ever printed of the Fantastic Four. I liked Spider-Man, but for whatever reason, the FF resonated more with me and that's the series I slowly collected, issue by issue.

By the time I finished my Fantastic Four run, Spider-Man was the most popular comic on the planet and collecting the run -- in any sort of decent condition -- wasn't financially realistic.

(Of course, with my completionist nature, the notion of collecting only **some** issues never entered my mind.)

But, I have adapted my collecting and decided that if I couldn't have every issue of Spider-Man, I could get a few that I really wanted.

Of issues 1- 6, issue number 6 was always my favorite read... and I've always had an itch to have a decent copy of this issue.

The cover trumpets, Half-Man, Half-Reptile... The Lizard Will Take Over All Of The Earth Unless Spider-Man Alone Can Stop Him! And, The Marvel Age Of Comics Is Here!

How exciting it must have been to pick up one of these fresh off a news stand in 1963!

Well, recently I finally picked up my copy. Forty three years after it was on a newsstand and 29 years after I first read my Pocket Comic which contained every wonderful page of Face-To-Face With The Lizard!

Ok, I've shared pics of this this book before, but they were digital pics taken at an angle. So, I finally got a scan of it on a legal sized scanner (Shhh... don't tell my employer what I was doing back in the graphic design department at lunch.)

The scan isn't as crisp and bright as the book actually appears... I sense the scanner is on its last leg.

As you've probably surmised, this is one of my favorites.