PSA/DNA Authenticator Was Also The Consignor

The sports memorabilia biz is most definitely not for the faint of heart. Collectors have long complained about deceptive advertising by auction houses; even more infuriating are the authenticators who claim to be independent but actually consigned the very items they claim they objectively appraised.

Those complaints, usually posted anonymously on Internet sites, are about to get a very public hearing in open court. A lawsuit filed in Boone County (Ind.) Superior Court by sports memorabilia dealer Bill Daniels accuses industry giants Mastro Auctions and PSA/DNA Authentication Services of fraud and questions the business practices and integrity of sports memorabilia's most important companies.

"I'm trying to fight this battle for every collector who has said, 'I got screwed but I have to take it,'" Daniels tells The Score.

The signatures, according to Mastro's catalogue, were authenticated by PSA/DNA. "The mother lode of autographed 8x10 color photos," the catalogue said. "The photos average NM/MT (near mint to mint) condition with '9-10' (on a scale of 1-10) signatures."

But Daniels says he got "sick to my stomach" when he received the photos. Sixty-five percent were damaged, with bent corners, creases and smeared signatures. Another 48 were in poor condition because the signatures were illegible. He also suspects some of the autographs may have been signed by players' secretaries - or may be forgeries.

Daniels contacted Mastro to get a refund, but when the company refused to exchange the lot or compensate him, he filed suit.

Mastro president Doug Allen says that's not accurate. "We offered Mr. Daniels the opportunity to return any photos he claims are undersized or have smeared autographs for a full refund on that portion of his purchase," he said in an E-mail. "Mr. Daniels refused the offer.

"I do not believe Mr. Daniels has ever identified an autograph he purchased that is not authentic," he adds.

Officials at Collectors Universe, PSA/DNA's parent company, did not return requests for comment.

Daniels and his attorney S. Andrew Burns later learned that PSA/DNA authenticator Zach Rullo, whose signature was on the letter of authenticity that accompanied the photos, was one of the consigners.

"That's a conflict of interest, absolutely," Burns says. "The biggest problem is that although they tell you how PSA is the leader in authentication and that they authenticated the lot, they never tell you that Zach owned it."

The quality of that authentication is also an issue; Burns says records indicate a three-man team that included Rullo spent 16 hours over two days poring through the 56,000 items offered in the 2004 auction. That's just a few seconds per item, the attorney says.

"That's not enough time to move the photos from one stack to another, never mind compare the signatures to exemplars or review the quality of the photos," he says.

Daniels, who says he spent $100,000 on Mastro auctions the year before he purchased the photo collection, says sports memorabilia's biggest auction house has lost a valuable customer. "They hold themselves out as the industry leader, but I'd like some checks and balances" Burns says about PSA/DNA. "If an auction house says something comes with a PSA/DNA letter of authenticity, I don't want to hear that PSA/DNA merely rubber stamped it."

Am I Missing Something Here?

Here is a videotape of a 1987 local Bay Area TV special hosted by Peter Breck. The special celebrates the 22nd anniversary of The Big Valley that ran on ABC from 1965-1969.

Are you kidding me?
Posted by Steve at 6:01 PM No comments: 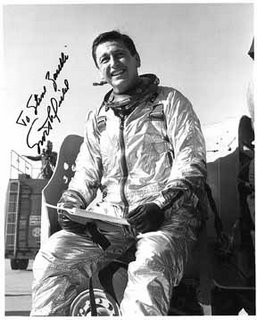 Scott Crossfield was the first to fly twice the speed of sound and the first to fly the X-15... the supersonic plane that paved the way to the space race. This just scratches the surface of his long and distinguished career. He served his country with great distinction and to his last day, he was active in aviation.

Mr. Crossfield was one of those rare breed of men who was a hero as well as a down to earth, nice guy. I'd written to him many times and he always promptly responded with a signed photo as well as a few kind words of thanks. Imagine, he was thanking me for writing to him.


Chuck Yeager may have been the early focus of Tom Wolfe's book, but Scott Crossfield -- a much more modest man -- was just as important to the early days of test flight. He truly had the Right Stuff.
Posted by Steve at 10:44 AM 1 comment:

If you haven't checked out James Powell's blog, The Collector's Mentality, do so.

It's a thoughtful -- and sometimes funny -- insight into the neurosis that drives collectors.
Posted by Steve at 3:17 PM No comments:

A website dedicated to PGX and comicbook dealer Terence Leder.

The Savage Pencil of Gil Kane

I had an itch for some original artwork and scratched it...

First, I am not a huge fan of Gil Kane's work. In fact, I think he drew the ugliest Superman ever. However, he is a noted Conan artist, and being a huge Conan fan, this page really appealed to me. You'll note that it's not really a battle action page, but the composition and linework is gorgeous and the bottom center panel really sold me. From The Savage Sword of Conan #85, page 12.

According to the Grand Comics Database, this page was inked by either Danny Bulanadi or Nestor Redondo. If anyone knows for sure, please leave a comment.
Posted by Steve at 9:42 AM 2 comments:

Last year I finished my quest to have every regular issue of the Fantastic Four ever published. From Volume 1, #1 to the current ish, I have them all.

You'd think that would be good enough, no?

Well, after I finished the run, I started to get the itch to upgrade where I could. Granted, with most of the issues under 10 I'll have to live with the midgrade copies I already have. However, I saw some room for improvement in the 30 - 60 range. In this range I'd like to have books that are at the least very nice looking FINES and VF or better where possible.

Luckily, many of my books in this issue range already meet this criteria, but there were a handful that I wanted to upgrade. Here are a few...

FF 37 in VF-(7.5). I purchased this from a CGC Board Member for a great price. This is a tough book and is prone to color touches. I was burned with a previous eBay purchase that was color touched.

FF 51 in VF/VF+. A really nice copy of a very tough book in high grade. The day this was printed and bound something must have been out of whack at the printer because most copies of this book tend to suffer from an indented top staple. This copy does not have the indented staple and the tear that tends to accompany it. Got it for a great price on eBay and luckily did not get burned.

FF 53 VF. Won on a lowball bid from a Heritage eBay auction. Advertised as a VF and I concur. I really nice looking book, however, I suspect it's been pressed. The book has a somewhat unnatural crispness and "snap" to it... kinda like what a brand new $20 bill feels like.

I'm Not Dead, But PGX May Be

Sorry for the long delay between posts. I'm finding that fatherhood is a very time consuming business... especially when the baby has colic! I have been following some important issues as well as collecting a bit here and there -- I just haven't had time to write about it. I will try to make up for some lost ground...

It appears that the wheels have come off the wagon at PGX, the comic grading company. Apparently, a number of high grade PGX Ducks books sold by Terence Leder (under a number of different eBay names) have been trimmed. Pre-trimming images have surfaced making the allegation indisputable.

PGX's Daniel Patterson has responded with the expected boilerplate type statements... "We're looking into it and taking steps to yada, yada, yada..." Sadly, nothing substantive and to even the casual observer, PGX is beginning to look like a one man garage operation that their critics have long alleged.

You can read all the gory details on the STL Comics Message Boards. More here. And even more here.
Posted by Steve at 9:04 AM No comments: