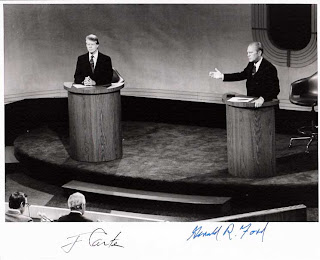 With all the coverage of the late President Ford, one aspect that surely won't be discussed is that President Ford was a dear friend to autograph collectors. The President signed freely for many years and was most generous. It wasn't until he suffered a stroke several years ago that he started turning down requests for his signature.

I was fortunate enough to receive a number of signed items from him, including this photo from the first Presidential Debate of the 1976 election. Perhaps my favorite however, is a large signed engraving of his portrait.