Finding a Neil Armstrong or Apollo 11 forgery is hardly a newsworthy event. They haunt the hobby like the ghost of phantom forensic document examiner Nicholas Burczyk.

However, every once-in-a-while I run across one so horrific it deserves honorable mention for inclusion in the Autograph Hall of Shame. Check out this train wreck, currently on eBay for a $5,999 Buy It Now... 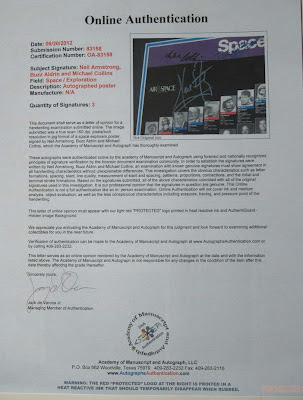 Operation Bullpen and the Marino Family Forgery Ring: Did anything change?

Over the past few days I have been re-reading Operation Bullpen by Kevin Nelson, the story of the Marino Family Forgery Ring and how the FBI took them down. The last time I read it was several years ago.

Something that really struck me this time around was how self-conscious the ring was about their product being “high quality” and how nervous they got when “someone was onto them.” For instance, the book recounts an incident where a collector returned a Jackie Robinson signed ball and a Roberto Clemente signed ball because he discovered the date of the balls made it impossible for them to be signed by Robinson or Clemente.

The leader of the ring, Wayne Bray, went into a fury because of this sloppiness and was especially angry at James DiMaggio (J. DiMaggio COAs) for issuing certs for these provably fake items. They counted on DiMaggio to rubber stamp items, but he was also essentially quality control. If something was a poor quality forgery, DiMaggio was not supposed to cert it.


Further, they got really nervous when some of the sellers they distributed to were removed by eBay. Once their sellers started getting removed from eBay, they feared law enforcement would soon follow. (Which it did.)

What makes this so interesting is the contrast with many of the fakes we see today certed by the usual suspects on the eBay banned COA list. The usual suspects on the eBay banned list – as well as some others – cert items that are laughably bad and obvious forgeries. There is no “quality control.” They apparently thumb their noses at law enforcement with no fear of consequences.
Blogs and message board threads like this one would have sent Wayne Bray and the Marinos into cardiac arrest. Yet, today’s crop of forgers, sellers and their “authenticating” accomplices don’t seem to care if almost every educated collector and dealer in the world is “onto them.” As long as there is a “greater fool” willing to buy their product, they plow on… offering countless obviously bad items in scores of venues.
So, how is it a decade after the biggest forgery bust in the world, the autographed collectibles market is perhaps flooded with more fakes than ever?
Posted by Steve at 8:08 PM 1 comment: