A Nancy Pelosi Story That Makes Me Smile

Heard on the Hill: Snubbing the Speaker

Speaker Nancy Pelosi got dissed by astronaut Neil Armstrong after a ceremony at which the California Democrat honored the moonwalking hero and his historic Apollo 11 flight.

After the event marking the 40th anniversary of Armstrong's "giant leap for mankind," held in the Cannon House Office Building on Tuesday, an admiring Pelosi approached Armstrong with pen in hand, a witness to the snub tells HOH.

Pelosi asked the publicity-shy former astronaut to autograph something for her, but he wouldn't oblige. "I'm sorry, I don't do that anymore," Armstrong informed the autograph-seeker.

Turns out, Pelosi shouldn't take his put-down personally. Armstrong reportedly refuses all autograph requests, no matter how powerful the person asking. He stopped giving out his John Hancock years ago, news reports say, fearing forgeries and concerned about those making large amounts of money from autographed items.

In fact, Pelosi took getting turned down in stride, spokesman Brendan Daly says. "The Speaker would go to the moon and back to try to get what her grandson asked for," he tells HOH. "But he learned a valuable lesson: You can't always get what you want."
Posted by Steve at 7:39 PM 2 comments:

I'm sure glad I added these items to my collection years ago... not so sure the Armstrong would be within reach now! The "Apollo 11" inscription is quite uncommon and adds a great deal of value to this undoubtedly authentic exemplar. Further, the signature is nicely preserved and exhibits very little fading so commonly seen in Armstrong signatures. My theory is that Armstrong used a blue Flair marker... a pen notorious for fading. Plus, so many people probably displayed their signed photos in a frame -- another reason a high percentage of Armstrong signed photos are badly faded. I purchased this from the original recipient, Scottie Hensley, about 7 - 8 years ago. 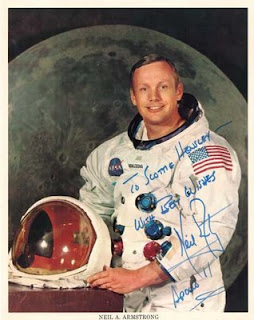 Even though Buzz Aldrin is a common signature, his signing fee is high (around $400 last time I checked). Apparently, he still gets people to pay the fee. A common signed Aldrin item might command $100 - $150 on ebay. 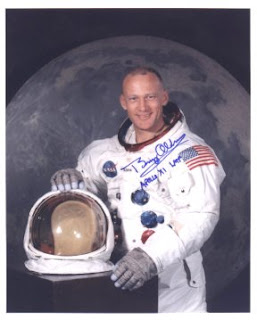 Mike Collins used to be the most uncommon signature among the Apollo 11 crew. He signed freely for a few years after Apollo 11 until the mid-70s when he worked at the Smithsonian. After that, he became more reclusive; he didn't hide his dislike for autograph requests. In recent years, he has conducted private signings and appeared at a few signing events. Still, his signature is in high demand. 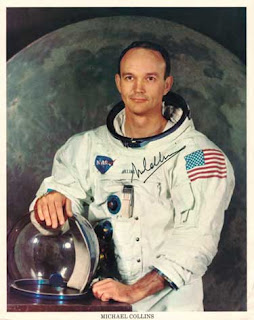 A signed Apollo 11 crew photo is one of the holy grails of astronaut autograph collecting, commanding thousands of dollars. While I'd love to have one in my collection, I think there is a higher probability of me being the next man to walk on the moon!
Posted by Steve at 1:13 PM 1 comment:

One giant signature for mankind

AMHERST, N.H. - Forty years ago on Thursday, astronaut Neil Armstrong hurtled into space aboard Apollo 11 for his rendezvous with immortality on the dusty surface of the moon.

But before he rode an elevator to the top of a 30-story-tall Saturn V rocket, Armstrong paused and wrote a check for $10.50 to a colleague.

“Here’s a check for the loan,’’ Armstrong said to Hal Collins, NASA chief of mission support. “But don’t cash it, because I will be coming back.’’

Four decades later, Armstrong’s autograph would become the most valuable from any living human being, collectors say. That check, with a clearly legible name that flows gracefully across its bottom, is now for sale through an auction house here.
“He’s the most sought-after human being for an autograph,’’ said Anthony Pizzitola of Houston, vice president of the Universal Autograph Collectors Club, the largest of its kind in the world. “That’s based on the fact that he just stopped signing in 1994. It’s just like a stock; that’s basically what it is.’’

The confluence of ultrarare qualities - an Armstrong signature, the timing of launch day, and the approaching anniversary - is sweet music to RR Auction, which is handling the sale here. Bids, which close at 10 p.m. tomorrow, appear likely to top the previous high of $19,000 for an Armstrong signing, Pizzitola said.

RR Auction owner Bob Eaton, whose modest storefront masks a star-studded office where Marilyn Monroe competes with Teddy Roosevelt for wall space, said the check shows something of Armstrong’s character. During a pressure-packed morning of flight preparations, the astronaut took time to repay a friend.

“Before he left for the moon, he wanted to show that this gentleman would be paid back,’’ said Eaton, a native of Newton, Mass., who first dipped his toes in the business at age 19, when he used an $1,800 loan from his grandfather to buy a heaping trove of baseball artifacts.

The check was offered for consignment by Noah Bradley of Charlottesville, Va., a collector of space memorabilia who bought the item from Collins’s son in 2002. With the anniversary of Armstrong’s moon walk approaching, Bradley decided to resell.
“As collectors, we are always temporary custodians of any item, and sometimes it’s time to let it go somewhere else,’’ said Bradley, 52, who restores and rebuilds historic homes. “If you’re interested in space collecting, Neil Armstrong is the pinnacle.’’

Armstrong’s is also a difficult autograph to acquire. The former test pilot and Korean War aviator, who became concerned about the profiteering and forgeries associated with his signature, stopped signing autographs for the public in 1994. He once even threatened to sue his longtime barber, who had sold a bit of Armstrong’s hair for $3,000.

What makes this autograph extra special, said Eaton, who recently sold a signed copy of the famous tongue-wagging photo of Albert Einstein, is that Armstrong included his rarely used middle initial. It was one of only three times he signed his full name, Neil A. Armstrong, during the Apollo 11 mission. The other two times were on a customs declaration after reentry and on a plaque left on the moon, according to the RR Auction staff.

Bids might top $30,000 by tomorrow’s deadline, predicted Bob Livingston, the auction’s director of sales and marketing. After the 10 p.m. window closes, bidders who participated before the deadline can submit new offers during 10-minute segments that are reset with each fresh bid. Once 10 minutes have passed without a new offer, the sale is closed.

Livingston predicted that bidding, primarily from baby boomers with keen memories of the July 20, 1969, moon landing, could continue until 6 a.m. Thursday. So far, bidding that opened July 10 has attracted interest from Europe and across the United States, the auction staff said.

The allure of an authenticated autograph, in addition to its monetary value, includes the knowledge that “it’s absolutely personal,’’ Livingston said.
RR Auction, which offers 1,500 items each month, handles the highest volume of autographs of any auction house in the country, Eaton said. The house’s fees for the Armstrong check will be 18 percent from the buyer and between 10 and 15 percent from the seller, Eaton said.

To walk through the business is to walk through a who’s who of signed photos and memorabilia from an array of politicians, sports figures, entertainers, and inventors.

Thomas Edison and the Wright brothers are favorites here, as well as luminaries as diverse as George Washington, Abraham Lincoln, P.T. Barnum, and Ted Williams.
There’s also a ticket to the US Senate gallery for the 1868 impeachment trial of President Andrew Johnson; a ticket to the 1935 trial of Bruno Hauptmann, executed in the kidnapping of Charles Lindbergh’s baby; and even a request from 1836, written in Spanish by Lieutenant Colonel William Travis, to buy beef for his doomed men at the Alamo.

From now through Wednesday, however, the focus will be on Armstrong, and a mission of unprecedented human exploration that captivated the world. What $10.50 had bought for a soon-to-be space traveler with no need for money - or any place to put spare cash and coins, for that matter - is unknown to Bradley or the auction house.

But what that check represented, in very human terms, is the unpredictable mortality of a mission whose sheer audacity seems magnified with every passing year.

“It captures that moment forever,’’ Livingston said.
Posted by Steve at 8:51 AM No comments:

More Does Not Always = Better 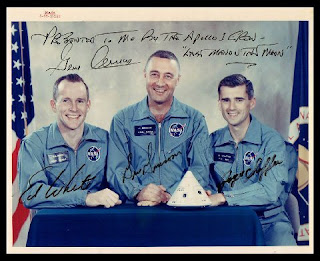 Here's a sad example of not having enough sense to leave something alone. Why add a common $50 signature (Gene Cernan) to a rare and valuable item like an uninscribed Apollo 1 crew photo? This is like adding a Jimmy Carter signature to a document signed by Washington and Jefferson. Senseless and tasteless.
Posted by Steve at 7:28 AM No comments:

Get Your Freeze-Dried Sod Here! 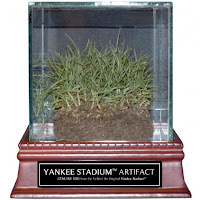 For the fan that has almost everything -- a freeze dried 3 inch round clump of sod from the old Yankee Stadium. As stated in the ad, "*PLEASE NOTE, DIRT MAY FALL FROM BOTTOM OF SOD." Won't that make a nice display? A pile of dirt and freeze dried blades of grass jumbled up in a plastic cube like sod salad.

If money is no object, you can get a 20 x 20 foot piece of Authentic Yankee Stadium Sod from behind home plate with the interlocking NY... comes complete with a bag of peat moss, grass seed, and a flag stating its origin for only $50,000.

What will they think of selling next? Locker room used urinal cakes?
Posted by Steve at 8:09 PM No comments: