Perhaps it's time for something a bit more positive. I was happy to add these absolutely authentic Charlton Heston signed photos to my collection.

This is a rather unique photo, and probably an uncommon dual signed photo. Almost all the Heston + Harrison photos I've seen have the secretarial Heston --including one from my collection previously. Here's the real deal.

And two signed photos from the only [known] private signing conducted with Mr. Heston. 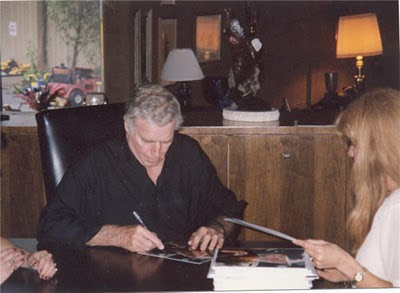 Autographed items with COAs and LOAs, or references to COAs and LOAs from the following people or organizations:

If you have an item authenticated by one of these parties, here's a bit of advice -- throw it in the garbage and forget it.
Posted by Steve at 11:27 AM No comments:

While we are on the subject of Charlton Heston, here is an interesting signed copy of Beijing Diary, apparently signed by Charlton and Lydia Heston. This is the only example I have ever seen signed as "Chuck."

After reviewing my Charlton Heston signature study, James Spence has informed me that JSA is updating their files to recognize the secretarial style.

Kudos to JSA for their friendly and professional response.
Posted by Steve at 2:54 PM No comments: 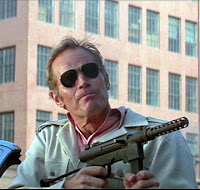 As much as it pains me to write this, it needs to be done.

The Charlton Heston autograph in your collection was probably signed by a secretary.

I know the first step is denial... I've been through it myself. But let's put aside wishful thinking and look at the evidence.

For several years some collectors have speculated that Charlton Heston used a secretary for through-the-mail requests. This has been met with some doubt. The analysis I saw was less than convincing because it primarily compared old signatures to new, and it focused on differences in "Heston," which were very difficult to clearly discern. The doubt was also fueled by Mr. Heston himself who claimed on several occasions to personally respond to mail requests.

But, these suspicious collectors were on to something. And, I believe I have found the definitive "tell." It is in the first name. And once you see it, it is as clear as a bell.

The Theory
Photographs and other memorabilia sent to Mr. Heston's office were signed by a secretary. However, Mr. Heston did authentically sign books through-the-mail.

Real vs. Secretary
In authentic signatures, the R in "Charlton" is distinctly a lowercase "r" and less than half the height of the L. The first four letters are clearly "Char."

In secretarial signatures, the R looks much more like a lowercase "l" and is about the same height as the L. So, the first four letters appear to be "Chall."

We'll start with books that were signed in-person. Note the distinct lowercase "r" and the R is much smaller in height than the L.
﻿﻿
﻿ 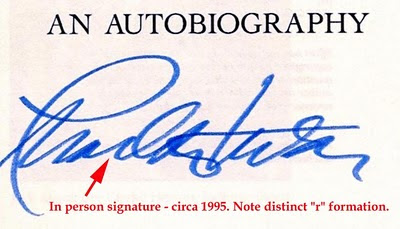 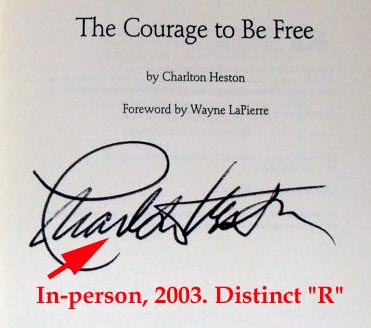 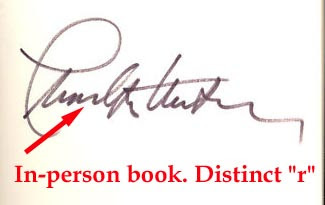 Now, we'll move on to some signed checks with various dates. Note that the "r" is distinct in all time periods.﻿

Next, here are signed Planet of the Apes trading cards (2001) from a supervised signing with Topps. Once again, the R is clear and no more than half the height of the L.

﻿
﻿﻿﻿﻿﻿﻿﻿ ﻿﻿﻿﻿
﻿﻿﻿﻿
The following example shows the stark contrast between secretarial and authentic. Presented like this, it's pretty clear that the same hand did not sign these two signatures.
﻿
The evidence shows that in every case where there was a known authentic exemplar, the R is distinct and much smaller than the L.

Here are examples of signed photographs obtained through-the-mail. Note the clear difference in the R formation and the R is almost as high as the L.


I could go on and list thousands of examples with the "Chall" formation. Just look at the signed photos on eBay or do a Google image search. About 95% of the photos have the earmarks of a secretarial signature. The books are almost always consistent with my theory as well.

Here is one signed photo I found that I believe to be authentic. Note the stark difference in the signature as opposed to the secretarial examples above. In addition to the distinct "r," the signature exhibits much less pressure.

Research
I reviewed hundreds of Charlton Heston autographs from various sources -- my personal collection, friends' collections and on online sites such as eBay.

I will note that, out a hundreds of exemplars, I found a handful of books that did not have a distinct "r" formation. My theory is these books may have been through-the-mail exemplars signed by a secretary. The reason for this could be that Mr. Heston's schedule did not allow for signing at that time or, once his illness took hold, secretaries began signing books through the mail as well as photos.

Dealers and Authenticators
I understand there will be resistance to these findings. There are thousands of signed Charlton Heston photos sitting in dealer inventories and probably tens of thousands more in collections -- the overwhelming majority of which are fakes. Some of these have been authenticated by reputable third party authenticators.

Until someone can produce proof otherwise, we must conclude we were all wrong.

For years Mr. Heston stated that he signed mail requests. Well, he was telling a half-truth. He was signing books sent to him, but his secretary was signing the photos and everything else.

Note all images are copyright their respective copyright owners.
Posted by Steve at 11:40 AM 26 comments:

It was 10 years ago that I publicly presented the Neil Armstrong Flag Test -- a litmus test to help detect some Neil Armstrong forgeries. In honor of the 10th anniversary, I reprint my web entry from 10 years ago (from my old Geocities web site, which has been defunct for some time.)

These findings were published in Relics of the Space Race by Russ Still, 3rd edition. On page 154, Russ Still notes that, "The week this book went to press, collector Steve Zarelli made a significant discovery with regard to forged Armstrong space suit portraits." Still then went on to summarize the findings below.

Down And To The Right
Neil Armstrong has signed tens of thousands of NASA White Space Suit (WSS) portraits in the past 30 years. The vast majority of these are inscribed. Armstrong typically signed with his infamous fading blue marker, with the signature located near his left elbow. It's no secret in the collecting community that he usually signed in this area. So, for years I used this as a general guideline as to where his signature should be. It was only recently that I made the connection as to where his signature shouldn't be.

Don't Tread On Me
I was recently chatting online with another collector who had asked me to take a look at a couple of Armstrong WSS signed photos. I make no claim to be an expert in the signature of Neil Armstrong. However, after getting burned with a forgery a couple of years back, I've made it my mission to study his signature closely and learn his characteristics. So, I feel comfortable offering an informal opinion in some cases.

The signatures the collector showed me appeared to be forgeries. There were several atypical formation characteristics plus unusually high signature placement. After detailing the unusual characteristics, I said, "Also, this signature is touching the flag patch on his shoulder, that means it's too high." I had always used the flag as a boundary to know when a signature was wandering too far from its typical placement.

Then referring to another (authentic) example, he responded, "That's funny, the inscription doesn't go near the flag either."

Armstrong doesn't write on the flag!

The flag patch area was more than just a "boundary", it was sacred ground not to be written over.

Confirming the Theory
"Could it be this simple?", I asked myself. I frantically searched through every authentic exemplar I could find. Sure enough, I couldn't find one where his handwriting went over the flag patch area. In cases with unusually long inscriptions, the odd line spacing indicates that he intentionally avoided writing over the flag area!

The next morning I contacted some friends with my findings. I asked them to review the theory and see if it sticks. Among the friends I contacted were such renowned collectors as Al Hallonquist, Gerry Montague, Russ Still, Bobby McLeod, Mike Joner, Rick Cigel, Ken Havekotte and Donnis Willis. Together, we searched our personal archives, past auction catalogs, and online sources. In all, we examined over 100 Armstrong WSS portraits. The flag theory was 100% accurate. In a few cases, his writing may slightly brush the outer perimeter of the flag, but it never intruded into the interior of the flag.

There were several cases where the Armstrong's writing was over the flag patch area. But, in every one of these cases, it was a signature that had been previously marked as suspicious before we even conceived the flag test. (Figures 4 and 5) 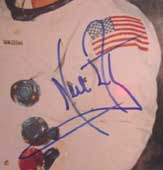 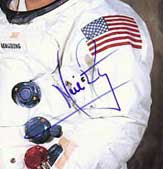 
Ironically, after presenting the theory, I learned that Mike Joner had independently arrived at the same flag conclusion as I did based on a previous conversation we had about Armstrong signature placement.

Intentional or Coincidence?
I submit that Armstrong intentionally avoids writing on the flag, and it is not just a coincidence. Here is why: 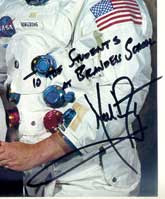 When the entire inscription fits to the left or below the flag area there is a "normal" amount of space between the two lines. (Figure 2) 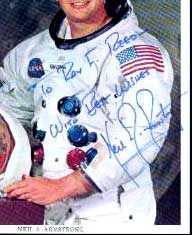 When there is a long 2 line inscription, the inscription is placed so the first line runs over the top of the flag, and the second line runs below the flag. The two lines are widely spaced to avoid the inscription running into the flag. What other reason could there be for the unusual line spacing that is only observed with lengthy inscriptions? (Figure 1)


An Effective Authentication Technique
Given the sample size and the 100% accuracy thus far, the flag test is a highly effective authentication technique. Even if an undoubtedly authentic exemplar came to light where there is writing on the flag, it does not nullify the flag test. It would still be safe to say that the flag test would be accurate in the vast majority of cases.

Caveat Emptor
Neil Armstrong's autograph is one of the most widely forged autographs. In many cases, simple signature analysis will weed out non-authentic material. Unfortunately, there are many deceptive forgeries in existence.

Luckily, many of the better forgeries fail the flag test. This is a simple test that someone with no signature analysis skill can apply. Also, bear in mind that uninscribed WSS are rare, and almost all the Flag Test failures we found were uninscribed. This further supports the fact that the Flag Test does weed out suspect exemplars.

Of course, unless we examined every Armstrong WSS in existence, we cannot say this theory will hold true 100%. However, given the findings thus far, any WSS with writing or signature over the flag should be viewed with great skepticism.


A collector recently send me a photocopy of a response he received from Armstrong's office. In short, Armstrong verifies the Flag Test by stating "I don't write on the flag." The collector wishes to remain anonymous, so his name has been blacked out. 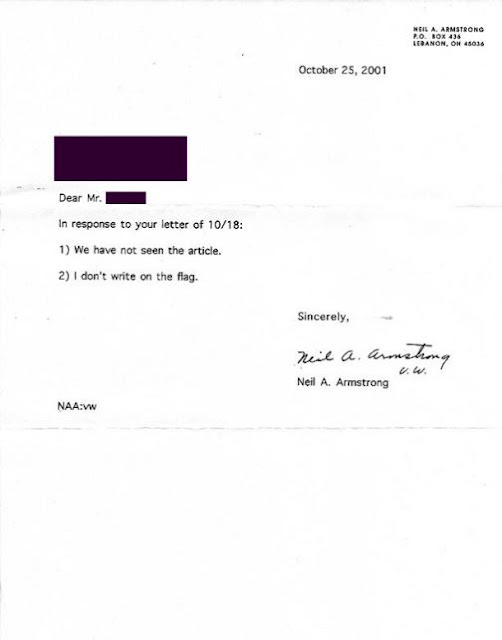 If you are one of the three regular visitors, yes this is the same Zipper's Collecting Obsession. I like to update the look every 5 years or so... whether it needs it or not.
Posted by Steve at 12:57 PM No comments: